Selected One Person Exhibitions:
Val Lewton: From Hollywood to Breezewood 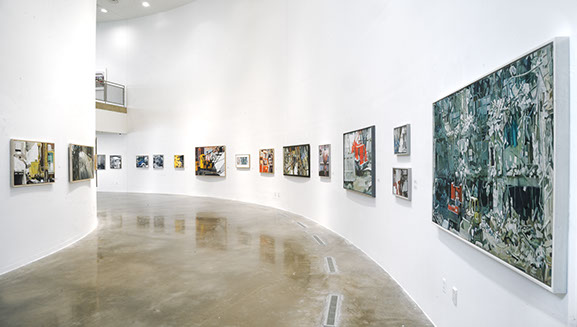 I met Val Lewton in 1976 when he volunteered to help photographer Paul Feinberg and writer Joel Siegel create Another Washington, a Washington Project for the Arts exhibition documenting the neighborhood surrounding the Greyhound bus station in downtown Washington, DC. Val designed the exhibit and recreated every sign on every shop in the neighborhood in acrylic on Plexiglas—from Kay’s Kwality Grill to Dolly’s drag bar. I found out that Val was a lot of fun and a very creative exhibit designer, and soon learned he was also a superb artist.

I was able to show some of Val’s masterful (and witty) Dale City watercolors when they were being made in the 70s, so it is extremely satisfying to show him in great depth some 40 years later. I am only sorry that Val could not live to see his exhibition. But, thanks to the hard work and dedication of his widow, artist Claudia Minicozzi, we are able to witness the breadth and depth of Val’s artistic career.

On behalf of the students of American University and the friends of its museum, I want to thank Claudia Minicozzi and all of the lenders and donors to the exhibition. I must also acknowledge Christopher Addison of Addison Ripley Fine Art, for putting together a parallel show to ours of smaller works by Val Lewton. And I am especially grateful to Benjamin Forgey, who wrote the exceptional and definitive essay on Val Lewton’s life’s work for this catalog.

We have been lucky to have had his writing talents in Washington, DC, since his early days as a cub reporter for The Washington Star a few years ago.

at the Katzen Arts Center

"The late artist Val Lewton was captivated by the yin and yang of destruction and construction, so he might appreciate what’s going on around his largest and best-known work, on the exhaust tower on H Street NW, near Second Street and Massachusetts Avenue. The trompe l’oeil mural seems to pierce the air shaft, revealing the Capitol dome beyond."

"Lewton’s loosely realistic style recalls Edward Hopper’s, but there are no nighthawks and no diners in Lewton’s unpeopled world. His landscapes often appear neglected or even abandoned. (This might show the influence of seeing so much of downtown Washington torn down while he worked there.) Cars stand in for their occupants, notably in “Whitehurst Freeway,” a huge 1970 canvas whose dull shades of red and green resemble the hues of a faded snapshot."

"His paintings use the artifacts of traffic and run of the mill objects—cars, trucks, roadways, semi-demolished buildings, and paint cans—to create improbably beautiful and personal compositions."